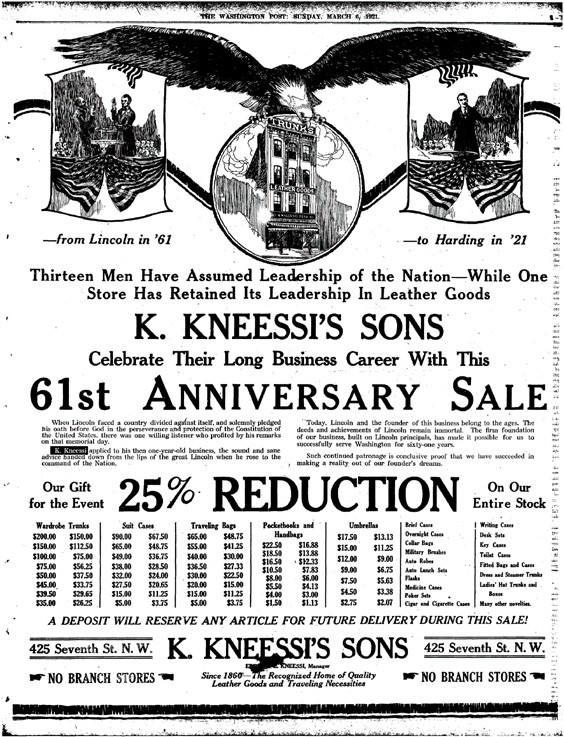 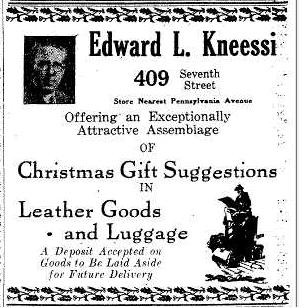 I’ve updated the notes on
the Kneessi trunk company that I gave you for your website awhile back.
Hopefully, there’s some more

details you can use here.

There were many newspapers
in Washington, D.C. from the 1860s up thru the 1920s. The Washington Post
was not the largest in

circulation until it later
took over other newspapers such as the Time and the Herald. (today there
is another Times which had nothing

to do with the paper of
many years ago). The newspaper of the day was the Washington Star. Both
the Star and the Post ran many ads

for the trunk & leather
industry in the city. I’ve poured over many ads and spent may hours gathering
data about the many trunk

companys in D.C. from about
1860 up thru the 1930s when most had vanished. Here’s a rough summation
of what I’ve gleaned.

>From what I can tell while
researching my family’s history, the leather goods/trunks/luggage trade
was quite vibrant in the VA-MD-DC area

from the 1860s up thru the
1920s. Among them was my great great grandfather Kaspar Kneessi and after
his death in 1890, his sons Gustave

and Frederick. Gustaves
son Ed managed many of the retail outlets over years and finally his own
before it also closed in 1929.

When Kaspar moved to 499
7th St, he took on as a partner Tophams former business partner, Thomas
Norflet. In turn, Conrad Becker (who

had been a business partner
of Kneessi, went into business with James Topham. Later, Norflet would
leave Kneessi and partner with Becker

elsewhere in the city. Topham
would later sell his new building  to Kaspar Kneessi. Upon Kaspars
death in 1890, the business at  425 7th

St would become  ‘K.
Kneessis  Sons’. Topham headed over to Penn. Ave. and later on F St.,
closer to the White House. Norflet would leave

Becker and just vanish.
The Becker leather business would keep a presence in the D.C. area up thru
the 1980s.

By 1916, Kaspars sons Gus
& Fred opened a 2nd store which Gus later bought himself when he sold
his interest in the family store. Gus closed it

central business district
of Washington, D.C developed into a roughly 40 to 60 square block area;
from 5th St on  the east to 15th St on the west;

and from I St on the north
to D St on the SE corner to F St on the SW corner (Pa Ave runs NW-SE which
cuts thru the area and helps define it).

Of course there were then
and later other shopping areas but  this was the ‘core’ and lasted
for years. There were many department stores which

and displayed some of the
trunks for sale. In 1915, they had an ad for ‘Neverbreak’ trunks and a
later ad showed where they bought out L.

Goldsmiths & Sons stock
of ‘Neverbreak’ trunks. Another ad in 1916 showed more of these for sale.
In 1910, Woodward & Lothrop claimed to

be ‘exclusive’ agents
for the Indestructo brand of trunks. A 1916 ad had Safe-Lock trunks displayed.
The Hecht company sold every kind known

to man. Smaller firms such
as Bermans on F St and Lutz on Pa Ave sold every kind of trunk possible.
As did James Topham, who advertised

Indestructo trunks as well
as making his own. In 1914, his firm landed a contract to make 10,000 U.S.
Army trunks – which he always played up

in later ads. One ad he
ran claimed Teddy Roosevelt took Tophams trunks on his African safaris.
James Topham died in 1912 but the business

continued in the the 1920s
under the H.W. Topham name. VA Trunk & Bag Company of Petersburg ran
ads for its Dread-Naught line of luggage

Neverbreak trunks seem to
have been manufactured by many vendors including the Kneessi firm. Ads
found on the internet bear this out.  The firms

this is Mr. Peters claim,
not the opinion of BVTS but that’s just fine).

The Kneessi firm at one time
or another sold all of these lines as well as products they made themselves.
Over the years they held many contracts

for leather goods for the
federal government. They once made a white leather harness, trimmed in
gold for President Grant. They made a sets of

luggage and trunks for each
member of the U.S. Congress, some of which turn up for sale on ebay from
time-to-time. In 1927, Fred Kneessi and

his 2 sisters cashed out
the business after 67 years and retired. Soon thereafter, most of the others
were part of history as well.

some of the firms found include: